This recipe was inevitable. Firstly, I promised something sweet many weeks ago and secondly, I am clearly committed to bready goods that are stuffed with other things. Even if those two things weren’t true, this is one of those recipes that’s everywhere. It is impossible to miss when you leaf through the pages of Jerusalem – there are three double page spreads devoted to it. It’s on both Not Quite Nigella and Smitten Kitchen and I’m sure countless other recipe blogs. It looks dramatic and eye-catching and like something a really good bread-doer would make. It had my name written all over it.

I must be improving in some sense, or at least becoming more bold, because I brazenly proceeded even after reading Ottolenghi’s pledge that this recipe “isn’t easy or quick”. I kept at it even though I was making the dough on the same day that I wanted to eat the bread, which is pretty clearly not recommended. Ottolenghi’s preference is that you prepare the dough the night before and then refrigerate. Great for people who are organised. Not great for people who have decided that they are making this stupid babka come hell or high water and they will not be stopped by specific instructions.

Feeling unjustifiably confident I started this recipe at 9am with a view to taking a perfect loaf to a dinner at 7pm. I found out the dinner was actually at a restaurant (not a friend’s house) and therefore had an easy out to delay the baking by a day and follow the recipe correctly. I did not take it. What can I say? I’m BOLD.

This dough was super weird. I followed the lengthy mixing instructions, which involved adding cubes of room temperature butter (was mine a touch colder than that? Definitely yes) and producing quite a strange sticky lump that then went into the fridge to prove. When I took it out at 3 to begin the really hard part of elaborate rolling and cutting and braiding I realised that the dough was a lot more like pastry than bread. Also I discovered that my not-quite-room temperature butter hadn’t necessarily been as incorporated into the dough as it should have. BOLDLY I soldiered on.

The next stage made me feel like I was well out of my depth…first off I needed to roll the dough into a 30x40cm rectangle which is never a strong suit of mine (no Millennium Falcons would be allowed here), then slather it with delicious chocolatey fillings, then roll it up (without leaving it all stuck to the counter), then cutting it lengthwise (knife work directly onto the counter! Maitland didn’t see me do it but he would have been wild), then braiding it together with chocolatey goo oozing everywhere, then air lifting it into its loaf tin. And somehow during all of this I needed to take photos that made it look like it was all going just great and I wasn’t misreading random instructions or making a frightful mess. I wasn’t altogether successful. 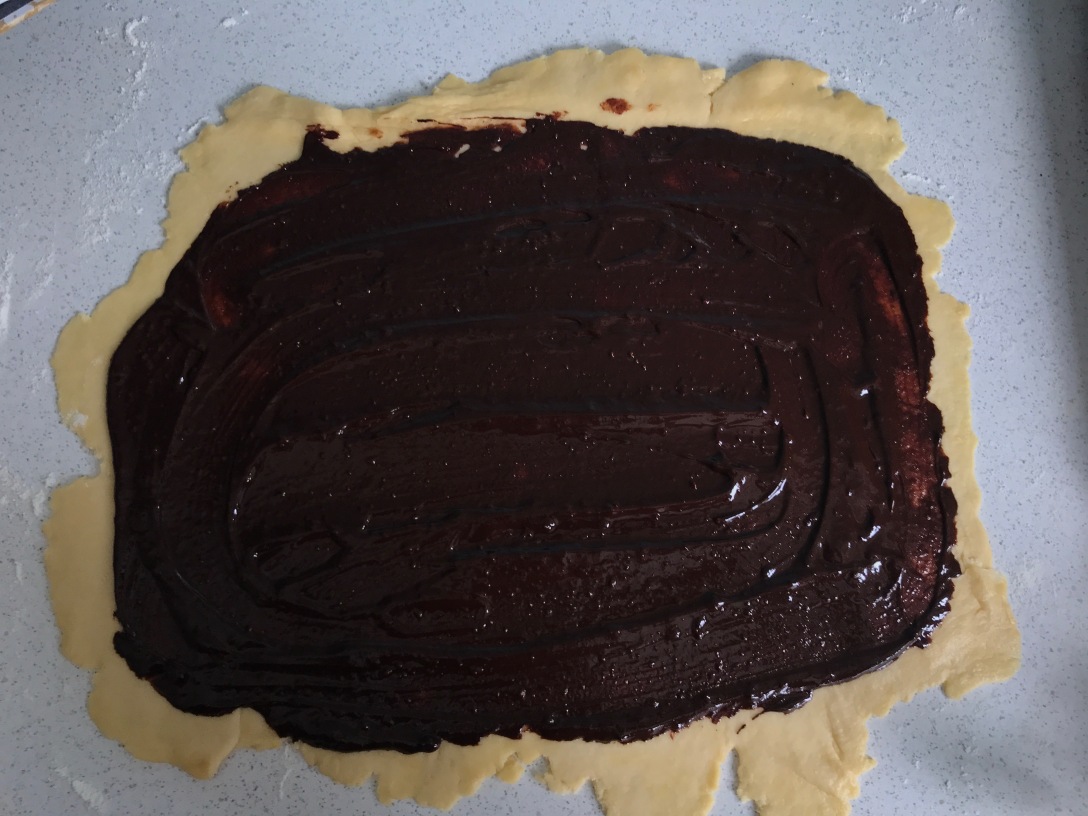 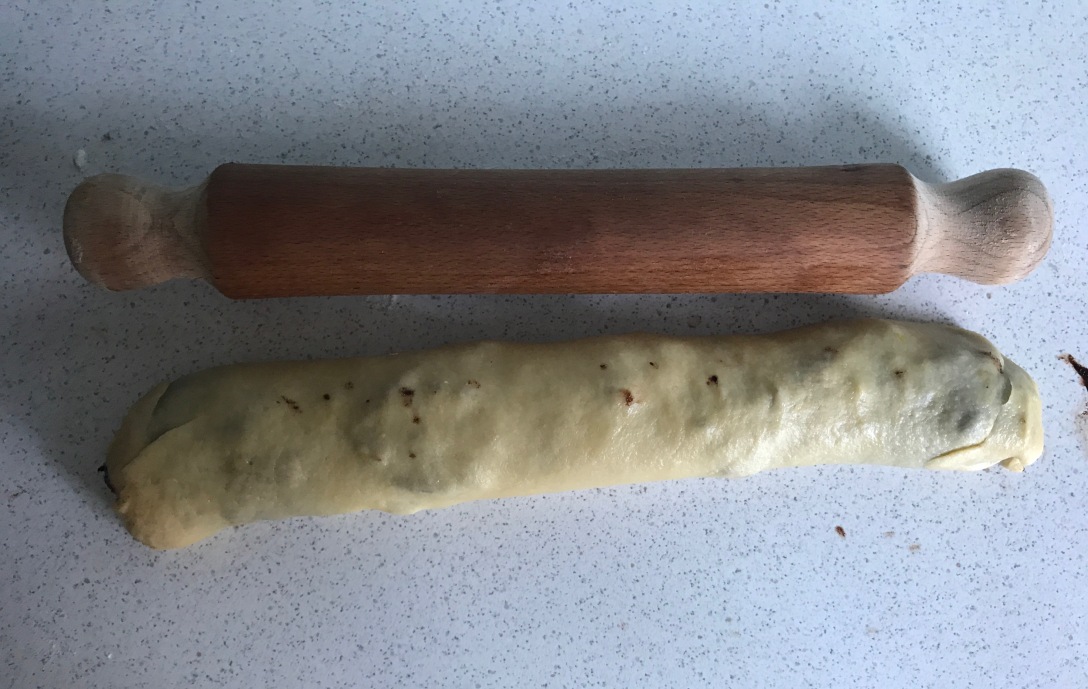 This is a messy recipe. But, as my archangel Deb (of Smitten Kitchen) notes, it’s actually fairly fail safe. Although I misread things like which side of the dough I was supposed to roll from, and I spilled chocolate everywhere and my loaf tin was the wrong size and my braid was oozy and ugly and when I made the syrup I couldn’t possibly use all of it as ordered, it was DELICIOUS. Once again, the power of yummy fillings come to the rescue. Because really, when the flaky, slightly lemony bread is filled with chocolate and pecans and doused in sugar syrup, how could it actually taste bad? Luckily for us all, this recipe makes two loaves.

The first, I delivered to the dinner and the great reception was a huge relief. Clearly, six hours in the fridge was an acceptable substitute for ‘overnight’, and all my little errors were forgotten. I was excited to make the second loaf and do even better! Round two I made some slight tweaks – I rolled the dough from the long side (creating a 40cm log instead of a 30cm one), I added a dash of cinnamon to the filling (but I didn’t measure it and there wasn’t enough and I couldn’t taste it so why did I bother), I tried super hard to work more cleanly for photogenic purposes and failed miserably and I adjusted the syrup quantities in line with Deb’s suggestions and ultimately had too little. The end result was basically identical – none of the adjustments really added or detracted from the outcome. It was still kinda ugly, kinda sticky, totally scrumptious.

For all the vague stress of process, I would actually do it again, and given how resilient it was to my adjustments I think I might even play around more. COULD I BE ANY BOLDER! Deb suggests orange zest instead of lemon in the dough – that sounds excellent and I would definitely try. Hazelnuts would obviously work in place of pecans to take it somewhere Nutella-y, and you could totally go down a caramel nut path instead of chocolate. If you want to stick to the tried and true though then godspeed, it’s worth it.

From Yotam Ottolenghi and Sami Tamimi’s Jerusalem, with some input from the Smitten Kitchen interpretation.

SYRUP (enough to cover both cakes and then some, this is the Yotam quantities)

To make the dough:
Place the flour, sugar, yeast and zest in a mixer bowl and use the dough hook attachment to stir everything together on the low speed for 1 minute. Add the eggs and water and work for a few second at this (low) speed, then increase it to medium and mix for 3 minutes until the dough comes together.
Add the salt and start adding the butter, a few cubes at a time, until it all melts into the dough. Try be more patient than I was during this process. Also, if your butter is definitely at room temperature it will help.
Continue mixing for about 10 minutes on medium speed until the dough is completely smooth, elastic and shiny. You will probably need to scrape down the sides of the bowl a few times during the process to get everything incorporated and Ottolenghi also recommends throwing a small amount of flour onto the sides of the mixing bowl to get everything unstuck. I tried this and was dubious about its effectiveness, but I am sharing in the interests of full disclosure.

Place the dough in a large bowl brushed with sunflower oil, cover with cling film and leave in the fridge for at least half a day, preferably overnight. I left my first loaf in for 6 hours and my second loaf in for 20 hours. They were indistinguishable.

Grease two 1kg loaf tins (23cm x 10cm) with some sunflower oil and line the bottom with a piece of baking paper. My tin was a different size and I only had one, but ultimately this wasn’t major. Divide the dough into two, keeping one half covered in the fridge.

To make the filling:
Mix together the icing sugar, cocoa powder, melted chocolate, butter and cinnamon (if using). You will get a spreadable, very delicious, paste. If you are making the loaves at wildly different times, like I did, then it’s legit to halve the filling recipe.

To assemble the loaves:
Roll the dough out onto a lightly floured surface into a 38cm x 28cm rectangle (we’re amongst friends, let’s call it 40 x 30?). Trim the sides to get rid of any unevenness and to feel like a dough-rolling pro.
Use a palette knife (or regular knife) to spread half the chocolate (or all of it if you halved the recipe and are making the loaves at separate times) over the dough, leaving a 2cm border all around. Sprinkle half of the pecans on top of the chocolate and then sprinkle over half the caster sugar.
Brush a little bit of water over the 40cm end that’s furthest away from you. Then, with confidence and care, use both hands to roll the dough up into a long log. Roll from the long (40cm) end closest to you towards the 40cm end with water. You’ll end up with a thick log around 40cm long. Roll it a little to even it out into a thick delicious cigar, sitting on its seam. If you accidentally roll it the other way and have a 30cm log (like I did the first time) then do not even worry about it.
If things aren’t already messy then they are about to be. Trim 2cm off each end of the log with a serrated knife (getting rid of those pesky filling free bits), and then slice the roll in 2, lengthways (!). See the picture to avoid confusion – you will have two long halves each revealing layers of dough and oozing chocolate filling.
Now you are going to braid the two oozey pieces together. With cut sides facing up, gently press together one end of each half and then lift the right half over the left half. Repeat this until you have a very simple two-pronged braid.
Carefully lift this chocolatey braidy mess into the prepared loaf tin. Cover the tin with a wet tea towl and leave it to rise in a warm place for 1 – 1½ hours. The cake will rise by 10-20%. Repeat the whole process to make the second cake (as I’ve noted many times, you do not need to do this straight away).

Bake the loaves:
Preheat the oven to 190°C/170°C Fan, making sure you allow plenty of time for it to heat fully before the cakes have finished rising. Remove the tea towels and place the cake(s) on the middle shelf of the oven for about 30 minutes, or until a skewer inserted comes out clean of dough.

Finishing touches:
While the cakes are in the oven make the syrup by mixing the water and sugar in a saucepan. Place over a medium heat and as soon as the syrup boils and the sugar dissolves, remove and leave to cool down. As soon as the cakes come out of the oven, brush all of the syrup over them. There is a huge amount of syrup. Ottolenghi insists you can use it all, Deb has halved the recipe. Do your best, but this really is an insane amount of sugar water.
Let the cakes cool a bit (“completely”) and then remove from the tins and slice. It’s obviously divine while warm, so if you can’t wait then no one will judge you.