A good friend of mine (Tali) proposed this as a joint venture. Diehard fans may remember Tali from my European blogging days. She and I have an extremely dubious co-baking track record, but my strong sense of oblogation (a word I have invented meaning feelings of duty to this specific blog, obviously) meant those historic concerns were overriden.

It also meant that I insisted we do this even when it became apparent that Tali’s own obligations would prevent her from enjoying the fruits of our labour.

Now, despite my concerns and our history I am going to tell you right now: this turned out great. It was pretty easy to make, smelled absolutely delicious in the oven, and, if it didn’t quite live up to Smitten Kitchen’s promise of dividing my life in ‘before Monkey Bread’ and ‘after Monkey Bread’, it did make for a fun morning of baking and a funner afternoon of eating.

The bread itself was the easy part of this exercise. The hard part was driven by Non-Blog Errors. The night before this venture I left my phone in the back of an uber. I cannot blame it on anyone or substance other than myself and that is at least as painful as the phonelessness itself. No phone is a nightmare for lots of reasons, but when you’re trying to establish yourself as a mediocre bread blogger it has the added nuisance of impeding photography. The images you see here are courtesy of Tali’s phone, Maitland’s phone and also Kath’s phone. (If you pick one person to be in this story you should pick Kath – she is a friend who turned up, had her phone commandeered for a couple of photos, ate some monkey bread and escaped). I also added insult to my own injury by forgetting my wallet when I went to buy ingredients. But I eventually got my phone back (at nearly midnight) and the bread turned out well, so all might be well that ends well?

You may be wondering, what the hell is Monkey Bread (also known by Maitland as Monkey Fists or Monkey Balls)? It’s basically a sweet buttery bread dough that is divided into a bunch of little balls (64, thanks for asking) which are individually dipped in more butter and coated in cinnamon sugar. 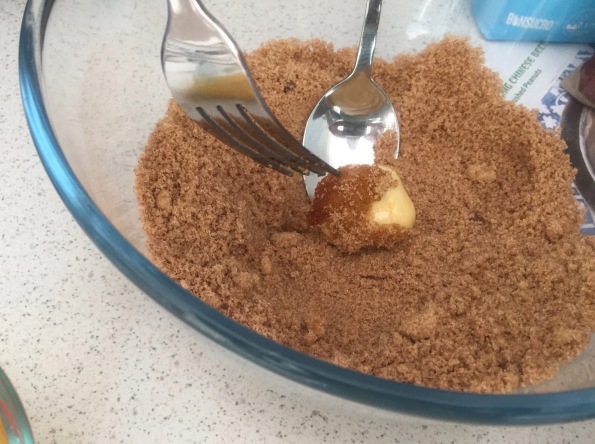 These little bubbles of heaven are then arranged in a bundt pan, cooked until caramel outside and fluffy inside, and then (because it wasn’t decadent enough) iced with cream cheese icing. I understand that there are variants of Monkey Bread which are less calorific, but where’s the fun in that? Kath described this version as tasting like ‘healthy donuts’. She’s absolutely incorrect about the healthiness (just because something is baked and not fried does not mean it cannot give you heart disease), but the result IS basically a donut cake.

The construction process means you can easily pull little chunks off and thereby trick yourself into believing you’ve merely had a taste when in fact you’ve eaten 30 Monkey balls. I realise that sentence is no good and I’m leaving it as is.

Courtesy of my favourite, Smitten Kitchen

Dough
4 tbsp butter (2 melted for the dough, 2 softened for greasing the tin)
1 C warm milk (she suggests around 43° C, mine was 37 – it obviously doesn’t matter that much, just get the yeast in the mood without killing it)
1/3 C warm water (see above)
¼ C white or caster sugar
1x 7g sachet of instant yeast
3¼ C standard white flour (no fancy high protein stuff today!)
2 tsp table salt

If you don’t have a warm rising location then pre-heat your oven before starting – let it heat up to 90°C then switch it off.

Mix together your 2 tbsp melted butter, milk, sugar, water and yeast in a bowl. In a separate bowl combine your flour and salt. Make a well in your dry ingredients and pour the milk mixture in. Mix until a shaggy ball forms and you can no longer stir.

Turn the dough out onto a lightly floured surface and knead for about 10 minutes, until you have a shiny elastic dough and can forget all about your missing phone.

Alternatively, you can use a mixer – Deb has the fairly intuitive instructions here.

Coat a large bowl (I reused the mixing bowl) with cooking spray and then pop your dough in. Give the dough itself a spray and cover the bowl with clingfilm. Leave to rise in a warm place or your pre-heated oven for 50 – 60 minutes.

Prepare a bundt tin by greasing it with the 2 tbsp softened butter.

Take the risen dough out of the bowl and, on a lightly floured surface, gently pat it into a 20cm square. Using a bench scraper or a knife, cut a grid dividing the dough into 64 pieces. Separate the pieces fairly quickly and roll each one into a little ball.

Using a fork, dunk each ball into the melted butter and then into the brown sugar mixture. Arrange balls in the bundt tin, building layers of bready cinnamony deliciousness.

Cover tin tightly with clingfilm and leave to rise for another 50 – 70 minutes either in your turned-off oven or another warm spot.

Remove clingfilm and bake bread for 30-35 minutes. You want the sugar to caramelise, it may bubble, and the bread to be cooked inside. I checked mine with a thermometer – the internal temp was about 100°C which the internet assured me was good.

Cool in pan for 5 minutes (not much longer because if that caramel hardens then you’ll be furious) and then turn out gently onto a cooling rack or platter. Allow to cool for 10 minutes before glazing.

Make cream cheese glaze
Beat cream cheese and icing sugar together until smooth, then add milk and vanilla essence. Alternatively try mix them all together at once, like I did, and accept a lumpy icing as your fate.

Adjust the consistency with more milk or icing sugar as needed – you want it to drape over the bread. Liquid enough to run a little and thick enough not to ooze right off. This is purely visual – it’s going to taste great regardless.