It is highly likely that the whole reason we are in Japan is for Naoshima. Naoshima is also known as the ‘art island’ and sits off the shore of Okayama in the south-east of Honshu (Japan’s main island), apparently in an inland sea. I don’t exactly know how I learned about Naoshima, but I suspect it was from seeing an image very similar to this one on Instagram.

Despite having basically no knowledge about (a) what was on the ‘art island’ other than a large yellow pumpkin or (b) where the art island was in relation to the entire rest of the country, I became obsessed with going there. Could a simple google search have answered all my potential questions? Yes, 100%. Did I bother to do that? Very no.

So, if the entire trip might be due to the allure of Naoshima’s big yellow gourd, then this leg of the trip exists solely because of it. We went to Okayama purely to base ourselves near Naoshima and I think Hiroshima made the cut partly because of a friend’s recommendation and mostly because going there after Kyoto turned Okayama and Naoshima into a logical stop on the way.

Which begs the question…was it worth it?

The answer is yes, but there were times when it veered away from that.

We arrived in Okayama feeling buoyant and cultured after Kyoto. I was keen to get to Naoshima the very next day as I’d checked the forecast and could see that if we didn’t go soon then the outlook was a bit grim. Our first order of business when we arrived at Okayama station was therefore to book tickets to Naoshima. Through this process we also found out that getting there was a tiny bit involved – two trains and a ferry. Now, in Melbourne I would consider a two-change transport journey completely untenable, but this is Japan and we are on holiday and this effing island is the whole reason we came so everyone just needs to grin and bear it.

What we didn’t immediately find out was that the next day (aka the day of the booking, the day of the good weather, the day where all my Japanese art island dreams would be realised) was a Monday. And Mondays are bad in many ways, but specifically here they are bad because none of Naoshima’s galleries are open on Mondays. This was disappointing, but could have been far worse as I realised this on Sunday and not on Monday after an early wake up call, two trains and a ferry.

So Monday became not-art-island-day and was instead devoted to Okayama’s own precious sights. Specifically its castle and its Korakuen garden (one of Japan’s top three landscape gardens, allegedly.)

The castle’s greatest feature, in my opinion, is its nickname of ‘Crow castle’, which gives me all the Night’s Watch Game of Thrones vibes and is just generally a good, slightly creepy, castle name. The castle’s weirdest feature, in my opinion, is its internal lift. Crow castle is actually a reconstruction from the 1960’s as the original building was destroyed during bombing in 1945 (put a pin in this, reconstructed castles are a ~theme~ in this blog post). The reconstructed building retains the traditional exterior, but appears to have eschewed that approach for the interior as I highly doubt the 1597 version had an internal lift. I am, as always*, happy to be corrected on that point.

Adjacent to the castle are the extensive gardens which are very garden-y and quite lovely in person but quite meh in our photos. I don’t have to tell you to go there if you are in Okayama, because if you are in town you will absolutely end up there as it is literally the number one attraction.

My number one attraction was still Naoshima, and the following day dawned every bit as grey and miserable as you could hope. As we waited in a queue for a bus (yes, our fourth form of transport for the morning) to take us from the ferry terminal to the ‘good bits’ I turned to Maitland and declared the art island to be a bad idea. It was too rainy to even countenance leaving the bus shelter and heading over to some of the visible sculptures and I felt as though the photos would be terrible and that this would in turn invalidate the whole experience.

Luckily for everyone, but mostly for long-suffering Maitland, this bus stop melodrama was a low point and things soon picked up. The highest commendations must go to our Okayama hotel, ANA Crowne Okayama, who provided a free umbrella for us to use. This offset their inferior buffet breakfast offering (vs. Dormy Inn Kyoto) and actually made walking around Naoshima viable.

Naoshima’s patron saint is definitely the architect Tadao Ando. Ando designed the three galleries we went to – Benesse, Lee Ufan and Chichu. Of these, Chichu was the highlight art-wise, but all three are architecturally incredible. If you’re a fan of MONA’s amazing integration of construction and nature, then you’ll be a fan of these three. Unfortunately there are no pictures permitted in any of the galleries, but the ideas are as follows:

Benesse – modern art including some very cool installations. The sculptures cluster around here and information on them, including the iconic Kusama pumpkin, can be found in the Benesse handout. Benesse gallery also extends into a hotel space where hardcore art fans can luxuriate for days of culture-ing. I imagine it’s unbearably chic and expensive. My favourite work here was probably this huge piece of interconnected world flags that was in fact a giant ant-farm.

Lee Ufan – a gallery only housing works by the artist Lee Ufan. Maitland and I agreed that this space created the unusual experience of the art enhancing the architecture rather than vice versa – the architecture is very cool. There are five separate rooms which each evoke quite a distinct atmosphere and have quite different artworks in them. The below image is unrelated to any of them.

Chichu – rightly the most popular. This gallery has three artworks/exhibits only and lists its own architecture as the fourth attraction. The gallery is mostly underground and has some spaces with very unique lighting as a result. One room is Monet’s waterlilies. Even though I’ve seen examples of these before it was truly awesome to see them in the context of this space and surprisingly hard to describe why it was so captivating and serene. The next was James Turrell, whose trippy light-based work can only be viewed by 8 people at a time. This meant queueing which is practically a hobby for us at this point. Maitland’s favourite was the third – an incredible installation in a specifically constructed space for a huge work by Walter de Maria (the artist responsible for the two large orbs I am perched between in the earlier photo). In the centre of the room sits a huge reflective ball and all around the hall are trios of gilded columns – each about a metre tall. Without seeing the space it’s hard to appreciate why the proportions are so enchanting and how the light from an oblong in the ceiling interplays with this immovable orb. It’s special. There are some great pictures on the official site here, but they’re even more impressive in person.

While I ultimately adored Naoshima and am so glad we went I would be cautious before recommending it. Aside from needing to really seek it out (vs. nipping there from Kyoto or Tokyo), it comes with some expense. Benesse and Lee Ufan each cost ¥1030 ($12) and Chichu is ¥2060 ($25). Our joint costs for galleries for the day were basically $100 and that excludes transport (to be fair, only about $7 each as the Japan Rail pass covered the trains) and food (which…next time I’d bring some with me). Not insanely expensive, but if you’re ambivalent about art then spending $50 on separate gallery admissions is probably a terrible idea. Although, if you’re ambivalent about art, why are you thinking about visiting an ART island?

I would not be cautious about recommending Hiroshima. We LOVE it here. Maybe it’s because we are staying in a palace of a hotel with a view to die for (shout out to RIHGA Hiroshima, which is absolutely colossal and right in the heart of Hiroshima’s downtown and which was still somehow unknown to our taxi driver).

And maybe it’s because it seems even more palatial after our last two shoebox rooms, and it’s somehow cheaper than either of them. Or maybe it’s because everything we eat here is fantastic (not a fermented bean curd in sight!). Or it could be that view.

In case you couldn’t pick it out from the window, this is Hiroshima’s castle.

Another castle with a nickname, this one is known as Carp castle. Crow definitely wins the cool name battle, but Carp did have the fish presence to back it up…It’s also the name of the local baseball team and their fandom was definitely present.

As you may have guessed, this castle is also RECONSTRUCTED (~theme~).

In fact, most of Hiroshima is reconstructed or relatively new as 90% of the city was destroyed in the atomic bomb of August 6th 1945. The incredible peace park in the centre of the city has a great museum which leaves you simultaneously devastated and hopeful and is obviously a must-visit if you’re in town.

Because we didn’t get enough art at Naoshima (apparently) we also checked out the Hiroshima Art Gallery which was opposite our hotel (did I mention the hotel had a great view? It had a great view). Once again photography was restricted so I can’t share any images from the oh-so-apt-for-Japan ‘Cats in Art’ exhibition that was on. Instead I would like to offer a selection of ‘Cats in Art’ images I took while walking home from dinner that evening. 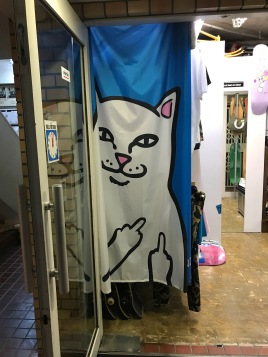 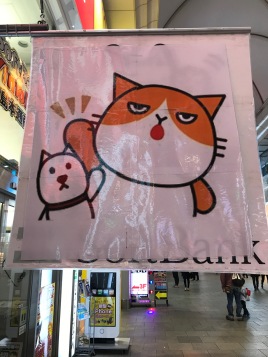 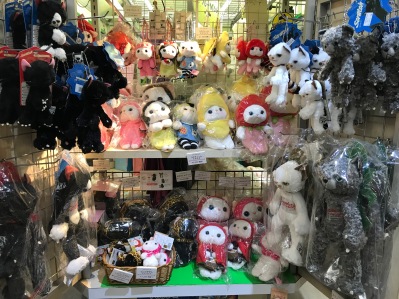 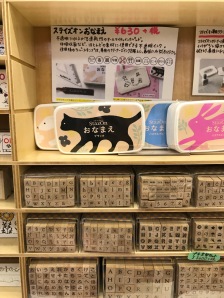 Naoshima also didn’t fill us up on the island front, so we spent a day at the highly recommended Miyajima. Miyajima’s big claim to fame is the iconic floating Torii gate, but I would advocate going for lots of other reasons.

Firstly there is this awesome pagoda and adjacent incomplete temple that were built a tidy 1000 years or more ago.

Secondly, there is a funicular (known here as a ‘ropeway’) which takes you up the mountainous middle of the island and offers some epic views on the way.

It also gave me the chance to serenade Maitland with ‘funiculi, funicula‘ and that alone was worth it. Lastly, you can go full hiking expedition on the Mt Misen peak. We went half hiking expedition – taking the funicular to its apex and then hiking up the rest of the way. Given that we were wearing ‘shrine visit’ outfits (jeans, tops that don’t wick sweat) even the half hiking option was a risky choice. Our calves are still in agony two days later.