A few weeks ago I made multiple promises. Firstly, while writing up the Muesli Rolls I declared I would resuscitate my stupid starter (i.e. begin all over again with a new one). I have not done that. It’s been three weeks. Secondly, in my dissertation on Croissants, I announced that I had bought the Honey baking book and that it looked like a fertile source of new recipes. On that point, at least, I was both truthful and correct. These recipes are from there and use the same dough base and different fillings to create seriously, ridiculously, unbearably sticky bundles of pure joy.

So, stop what you’re doing. Well you’re reading this so don’t stop immediately, instead clear your schedule because after you finish reading this you should make one or both of these connected recipes. I’ve never written these words before because, historically, even the most raging of my bread success stories have come with the caveat of ‘this is hard work in the sense that it requires you to attend to it regularly over the span of 4-10 hours’. These two will not take up your whole weekend, but they will make you feel like god’s gift to yourself and those fortunate enough to be around you.

Last weekend, buoyed by my croissant prowess and by the excitement of purchasing the other Honey cookbook (speaking of which, I also made these chocolate cookies filled with tahini cream mid-week…it’s so confusing how I’m not getting thinner?)

There’s a lot of recipe crossover here. Both recipes use the same base dough, which is really easy to make (no machines or lengthy kneading period) and which then rests in the fridge for 2 hours (the perfect duration for buying filling ingredients!) or up to 12 hours (the perfect duration for a morning treat). After that you make fillings, roll the dough, do the filling things and then let your bundles of love prove for around 40 minutes total! That’s light-speed in bread world! While that’s happening you make sugar syrup and an egg wash and pre-heat the oven and then before you know it one of these divinities is out of the oven and in your mouth.

There may be one other factor at play here. Obviously both buns are outrageously delicious, especially after being doused in sugar syrup and while still warm. Obviously, they’re pretty easy to make and are full of ingredients that kind of can’t fail (ricotta and orange! pistachios with cherry!).

Less obviously, they are connected for me to a journey out to the Melbourne suburb of Oakleigh. While the dough rested for the sweet cheese buns I decided that the best place to get orange blossom syrup, an ingredient needed for the filling, would be the Middle Eastern bakery and deli ‘Oasis’. What I had forgotten is how much I absolutely adore Oasis and how spending time in an extensively stocked deli is basically up there with a bookstore in my ranking of heavenly places to browse. Even after spending 45 minutes wandering up and down aisles (can I justify buying 3 flavours of halva when I’m not sure how much I like it? Do I need this Greek cheese I can’t pronounce but maybe saw used once in a recipe? Should I get some other varieties of molasses in case I need them? Maybe an assortment of unusual flours could come in handy?) and trying my best not to buy additional baked goods, I decided that one trip was not enough. I left with the orange blossom water, but deliberately scheduled a return trip to buy sour cherries. I’ll probably go back next week, baking project or not.

Anyway, these buns are my new favourite thing. The dough in particular is just so easy to work with and I bet it would be perfect for other fillings, so if you’re less of a stickler for following recipes than I am then go forth and create. I’m off to browse the Oasis website and to order another book by the geniuses behind Honey. And also to eat another Fitzrovia bun because shut up I can get thin later.

This and both fillings are care of the utterly perfect Honey & Co ‘The Baking Book’. Buy it and the original book immediately and watch your life improve overnight.

Combine yeast, sugar, butter, eggs and 80g/ml of the milk in a large mixing bowl. Top with the flour and salt. Either use the dough attachment on your mixer or your hands to bring it all together to a smooth shiny dough. Add the remaining 20ml of the milk if it’s too dry and don’t fret about any flecks of butter that are not completely incorporated.

Try avoid adding flour if you can and suffer through a bit of stickiness as you work. The less flour you add to this dough the better.

Once the dough has a nice texture to it – approximately 2-3 minutes with an electric mixer or 5-6 working by hand – wrap the bowl in cling film and leave the dough to chill for at least 2 hours and up to 12 hours (much longer and there will be a bit of proving…I left my Fitzrovia dough more like 14 and can’t complain).

Needed for both recipes, prepare whenever – I go for during the dough prove

Combine all ingredients in a small saucepan. Bring to the boil, stirring to dissolve the sugar. Remove any scum from the surface and then remove from the heat.

You can make heaps more following these ratios if you’re so inclined – it keeps in the fridge in a jar for up to 2 weeks. If you’re making over a litre then let it boil a little longer (3-4 minutes) before removing from the heat.

Combine one egg with a pinch of salt and whisk together (the salt helps break down the proteins and makes the egg more brushable, apparently).

Remove dough from the fridge and roll out on a (VERY) lightly floured surface to a 36cm x 36cm square.

Using a sharp knife or pizza slice, divide the dough into a 3×3 grid – you will have 9 squares around 12cm x 12cm each.

Divide the filling between the squares. Take a square and fold two opposite corners into the centre. Then fold the other two corners in. Use your finger to press down on the point where all four corners meet (I did this too gently and as a result my envelopes sprang apart during baking). Don’t worry if the cheesy filling is oozing up in between the folds a bit, that’s part of the fun. Repeat with the other squares. 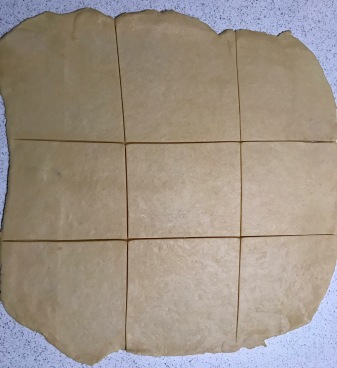 Place all your little parcels onto a baking sheet with a decent amount of space between them (approx 7cm). Note that if you want to freeze them for later baking then do this now. Otherwise prove for around 40 minutes in a warm place until dough is shiny and taut.

Carefully brush the dough surfaces with egg wash (avoiding the cheese ooze). Place tray/s in centre of the oven and cook for 10 minutes, then turn the tray for an even bake. Reduce the oven temperate to 200°C/180°C fan and bake for a further 6 minutes, then remove from the oven.

Add the orange blossom water to the sugar syrup in a bowl. Either use a part of tongs to dip the buns carefully in the syrup (and then return to the tray) or brush the buns very generously with the syrup all over, using it all up.

Allow them to cool slightly and then devour.

Roll dough out on a (VERY) lightly floured surface to a 20cm x 30cm rectangle. Spread dough with butter and sprinkle with the sugar mixture, making sure you reach the edges. Dot the sour cherries and the pistachios all over.

Starting from the 30cm edge closest to you roll the dough up into a tight log. Cut the log into pieces – I got 9, the recipe suggests 6-8. You can probably figure out what fatness of scroll you’re after. 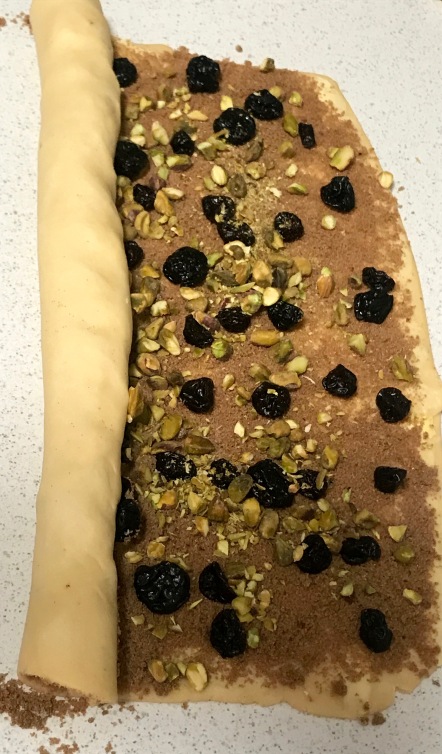 Place the scrolls into a baking tray lined with baking paper. Pick a tray which accommodates them all with some room for them to expand and nudge into one another. Freeze them at this point if you’re into planning ahead.

Leave the scrolls to prove for around 40 minutes somewhere warm.

Halfway through proving preheat your oven to 220°C/200°C fan.

Brush the scrolls with the egg wash and sprinkle over the held back tbsp of pistachios (I forgot to do this until after mine went in the oven for a bit…yours will likely be less blonde as a result).

Cook the scrolls for 10 minutes, then reduce the temperature to 200°C/180°C fan and cook for another 8 minutes.

Remove from the oven and pour over the sugar syrup.

Try your best not to eat them all in a single day.

One thought on “Tasks 28 & 29: Sweet Cheese Buns and Fitzrovia Buns”